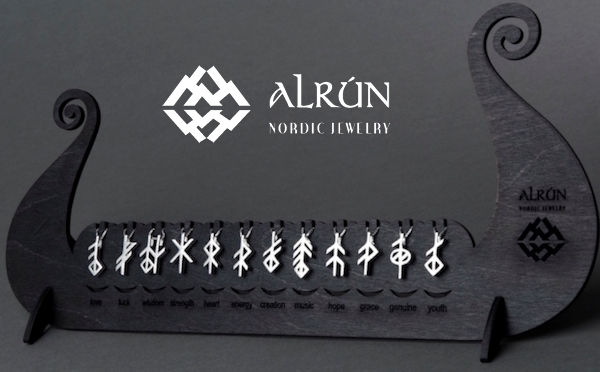 Alrún Nordic Jewelry bases all its designs on the art of the Vikings. With inspiration from ancient Viking art, we aspire to bring the legacy of Norse culture to modern society.  All symbols are created using the method of binding runes, an historic process whereby individual Runic letters are overlapped to make a single word or name. While there are several different Runic alphabets, we rely on the younger Icelandic Futhark, which we feel is most representative of ancient culture and custom in Iceland.  Every symbol in our collection is painstakingly designed to fuse both meaning and esthetic beauty, and you will find that each design holds special importance for each unique person.
Runes are a symbolic form of writing that date back to the second and third centuries.  Runic letters were used in alphabets in all Scandinavian countries, as well as by many ancient Norse /Germanic tribes.  In Iceland, there were two Runic alphabets.  These were called the Elder and Younger Futharks.  Runes in Iceland were used mainly in Pagan tradition, and were carved in stone, metal, wood and bone.  Ancient farmers also branded their sheep with Runic symbols to identify them as their own.  People believed that the Runes possessed great powers, and were sent from Odin, the mightiest of Scandinavian pagan gods.