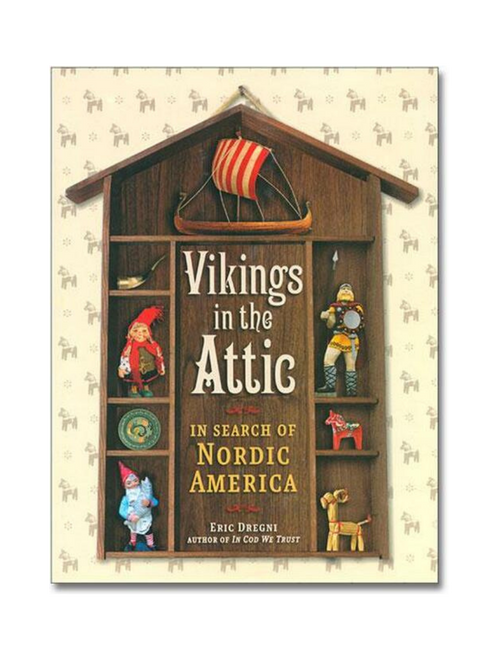 Vikings in the Attic: In Search of Nordic America - by Eric Dregni, author of In Cod We Trust.

Growing up with Swedish and Norwegian grandparents with a dash of Danish thrown in for balance, Eric Dregni thought Scandinavians were perfectly normal.  Who doesn’t enjoy a good, healthy salad (Jell-O packed with canned fruit, colored marshmallows, and pretzels) or perhaps some cod soaked in drain cleaner as the highlights of Christmas?  Only later did it dawn on him that perhaps this was just a little strange, but by then it was far too late: he was hooked and a dyed-in-the-wool Scandinavian himself.

Dregni tracks down and explores the significant—and quite often bizarre—historic sites, tales, and traditions of Scandinavia’s peculiar colony in the Midwest.  Vikings in the Attic goes beyond the lefse, lutefisk, and lusekofter (lice jacket) sweaters to reveal the little-known tales that lie beneath the surface of Nordic America.  Ultimately, Dregni ends up proving by example why generations of Scandinavian-Americans have come to love and cherish these tales and traditions so dearly.

Review:
“While reading Vikings in the Attic, I solved two family mysteries and added at least ten new jokes to my act.” —Louie Anderson